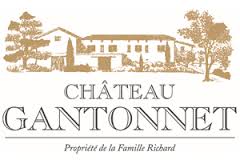 Château Gantonnet dates from the 19th century, situated in Sainte Radegonde, a small village with its origins in the Middle Ages. In the Entre-deux-Mers region, 20 km from Saint-Emilion and 60 km from Bordeaux. Close to the Dordogne river, the states of 83 hectares is overlooking the village where it enjoys excellent exposure to the sun. The Richard family acquired the estate in 1962, invested heavily with recently new vatting room offering large capacity, temperature controlled equipment in order to produce aromatic and fruity wines.

Alongside its treasury of vines planted on a plateau of very fine sandy-clay soils (commonly known as “boulbènes”), Château Gantonnet vines are spread in 70 hectares producing red wine and 13 hectares producing white. The Château has ideal orientation allowing good crop health and conditions for ripening. Simple Guyot pruning with 3000 vines per hectare for our old vines (age 35-40 years), and 4000 vines per hectares for the recent plantations.