​BATCH WAS ORIGINALLY INSPIRED BY THE CRAFT BEER SCENE IN THE US.
THE COMPANY STARTED IN NOVEMBER OF 2011 WITH 3 US STYLE BEERS.

Following a trip to the US and an inspiring visit to a craft distillery, they decided to change course and begin distilling instead.

In November of 2012, they began distilling, taking plenty of time to perfect their recipes. Taking their inspiration from their travels, they experimented with interesting botanicals, perfecting the recipe for Lancashire’s first gin.
By February of 2015, the Batch team was distilling in the basement of their future Head Distiller’s house. However, due to the limited production of the product all wages were paid in gin!
In August of 2016, Batch moved into their new distillery in Burnley, Lancashire.
In November of 2016, they purchased a new 165 liter still named Adrian which is run alongside of their 4 original stills. Adrian was so tall that they needed to alter the roof of the distillery!
In 2018, Batch distilled their first whisky, which is currently resting in ex-bourbon barrels from Kentucky. 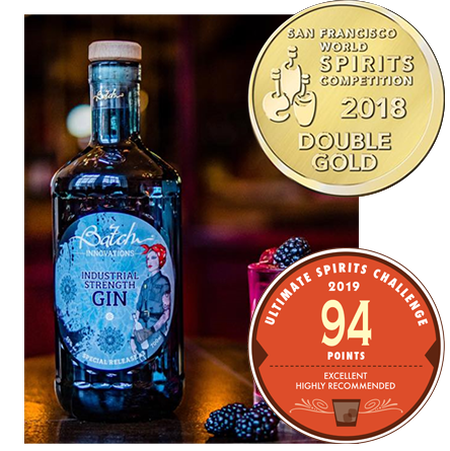 Awarded a Double Gold at San Francisco World Spirits Competition, Industrial Strength Gin is judged one of the best spirits in the world and was named BEST GIN IN THE WORLD! Industrial Strength is the Batch take on a Navy Gin and a nod to the industrial heritage of their hometown, Burnley.
​An overproof twist on their Signature Gin, with less spice and increased juniper, it provides a perfect base for any classic gin cocktail, or an incredible gin &tonic. The addition of Melissa results in sweet lemon notes on the nose, and lingering, gentle citrus on the palate. 55% ABV.