This province, famous for being the Cradle of Humankind now also boasts this tiny distilling pioneer who makes rich, single malt whisky, similar in style to those that made the Highlands and Islay regions of Scotland famous. In the old days all provisions, including casks of local beer and imported Scottish whisky were transported by dray cart. Proud of his team of sturdy shires, the Drayman would quietly spur them on, directing them to the next delivery address.

“Drayman’s Single Malt Whisky is made in the same way as its Scottish inspiration, albeit on a craft scale. South African whisky legislation is almost the same, which means Drayman’s whisky faces the same stringent quality controls as Scotch. Being on the Highveld we have the unique maturation influence. I have a small but devoted operation where care and passion are the essential ingredients to make premium quality whisky.”
– Drayman’s founder and owner Moritz Kallmeyer 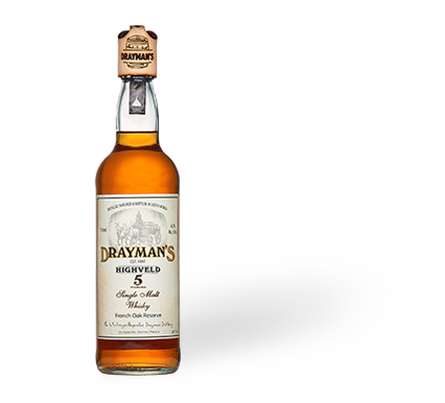 Drayman’s Brewery Highveld South African
5 Year Old Single Malt Whisky
Drayman’s South African Highveld 5 Year Old Single Malt Whisky is the first single malt whisky from the African continent to be sold in the US. This whisky is distilled from 100% pale barley malt, all of which is grown in the Swartland area of South Africa. The malt is
fermented for an unusually long period of seven days with their own proprietary house yeast slurry. Fermentation is enhanced with a lactic final phase in order to enhance the smoothness of the distillate. This whisky is twice distilled, and enters the cask at 65% abv.
Drayman’s uses exceptionally deep cuts: using only 8-10% of the spirit. Comparatively, Macallan has some of the deepest cuts in the world and uses 16% of their spirit. The spirit rests for a minimum of five years in medium-  toasted Bordeaux casks, which previously held South African wines (both red and white).