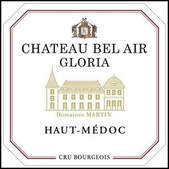 Château Bel Air Gloria is situated in Cussac, on the edge of Saint-Julien Beychevelle and on the banks of the Gironde. Although the appellation is less well-known, the vineyards are given the same care and attention as the family estates in Saint-Julien.
​
The Martin family acquired Château Bel Air in Cussac Fort-Médoc in 1980, attracted by the potential of the “cru” and its proximity to the vineyards they already owned and confident in the future of the Haut-Médoc appellation. It very soon joined the Crus Bourgeois Federation and has achieved unbroken Cru Bourgeois recognition for over 25 years.
Faced with a large number of wines sold under the name Château Bel Air (using several spellings) and to avoid confusion among our many customers, we recently decided that our wine would now be called “Château Bel Air Gloria” to make it easier to identify.